Got hit by a Penguin and lost 80% of my Google search traffic (now what?)

I don’t usually worry too much about SEO, I prefer to believe that good content will attract visitors (I know, I´m sometimes a bit naïve!). So, I was not even aware that on April 24rd Google was launching the Penguin update but its effect has been devastating: I’ve lost 78% of my organic search traffic since then. See the graphic below comparing the months of March and May. 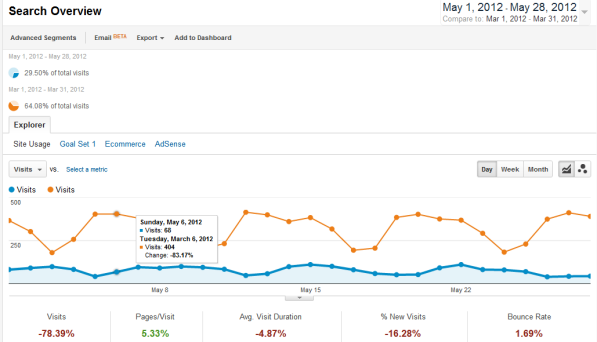 Since I was not aware of Penguin I just thought it was a temporary thing until today that realizing that the stats were not recovering I started to look into it and discovered that Penguin was the most likely cause. Nevertheless, the real question is why? and what now? (and since I´m totally lost, any help from you will be really appreciated).

Let me start by saying that I plead innocent. The affected site is mainly used as a dissemination channel for my research results and opinions about software development, it’s not at all a site created with the goal of making money so I have never (consciously) followed any of the spammy practices (like buying links) that Penguin is supposed to target. And my google webmaster tools account has not messages for me either than can enlighten me.

Nevertheless, I did see something very strange when looking at the “links to your site” section. There is one site that it’s linking to 4 of my pages more than 200.000 times! Can google think that I’m stupid enough to have bought all those links? Is this the reason for being hit?. I have already contacted people from that site (also researchers, so clearly they didn’t do it on purpose either) to see if they can prevent this but the question is whether this will restore my site ranking in google searches (and if so, when?).

To be honest, it’s scary that so much of your site success depends so much on a single company and on the tweaks this company does to its ranking algorithms (I hope they are at least strong supporters of test-driven development).